When to eat organic … or not?

I recently met with a Michelin-starred chef who was bemused that I recommended organic foods. “I have never been able to taste the difference” he mentioned.

“Possibly true but, unless you like having lethal chemicals inside your body, I highly recommend going organic”, I replied. The one study showing no difference between organic and conventional food was funded by the food and agriculture industry. Many other studies have linked organic vegetables to a decrease in negative effects from pesticides and have found that organic vegetables contain more nutrients and phytochemicals than conventional ones.

Should we be surprised to learn that substances like pesticides may not be completely harmless where our own health is concerned?

There’s plenty of evidence that they’re neuro-toxic and carcinogenic for those of us who eat them. A large meta-analysis in the journal Neurotoxicology found that chronic exposure to some common pesticides significantly increased the risk of Parkinson’s disease. Studies in adults and children have also linked pesticide exposure to kidney, pancreatic, prostate, breast, and stomach cancers, as well as respiratory problems and depression.

I know this all sounds scary, but you can greatly lower your exposure to pesticides by eating organic. A 2015 study funded by the EPA found that consumers who often or always bought organic had significantly less insecticides in their urine, even though they ate 70 percent more produce than people who bought only conventionally grown fruits and vegetables.

As you’ve no doubt noticed, organic is often costlier, which can be an obstacle for many people. Is it worth it? In some cases, absolutely. The Environmental Working Group ranks the fruits and vegetables that are most contaminated with pesticide residue. That list, known as the “Dirty Dozen,” can tell you which foods you must buy organic. The EWG also keeps a list of the foods that have the least amount of pesticide residues, known as the “Clean Fifteen.”

There really is no need to buy everything organic. If we buy in-season produce at farmers’ markets from small local growers, we probably also wind up eating healthier food. Below, you’ll find the big list, 48 foods ranked from containing the most pesticides to least. I would focus on the bottom 30 of the list if you can’t find organic. And if you want to eat any of the foods in the top 20, then choose organic as much as possible.

Our health gym in Summertown, Oxford is more than just a gym – we approach health and well-being holistically, with experts on-hand to guide you towards a healthier diet, more regular, targeted exercise and other ways to improve your health through your lifestyle. Book your personalised tour today.

Keep in touch with our health & lifestyle expert advice

See what our members say 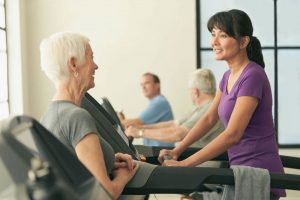 Tweets by viavi_be
Go to Top